Vision is one of the most important senses for birds, but the connectivity of the cells involved in the visual process is largely unknown. caesar researchers now published a study in The Journal of Neuroscience, providing an important foundation for understanding early visual processing in the avian retina.

Double cones are the most common photoreceptor cell type in most avian retinas, but their precise functions remain a mystery. Using advanced electron microscopy techniques, one of our researchers, Anja Günther, and colleagues created the first three-dimensional dataset of a bird retina to identify previously unknown connections between photoreceptors and provide a classification of chicken bipolar cells based on their anatomy and photoreceptor contacts. The newly described anatomy and connectivity suggests numerous interactions between rods and cones as well as between different cones types at the first stages of visual processing. Remarkably, 13 out of 15 identified bipolar cell types got at least part of their input from double cones indicating that the double cones play many different and important roles in avian retinal processing.

The research team from caesar and the University of Oldenburg concludes that the neural network and thus information processing in the bird outer retina is much more complex than previously expected. 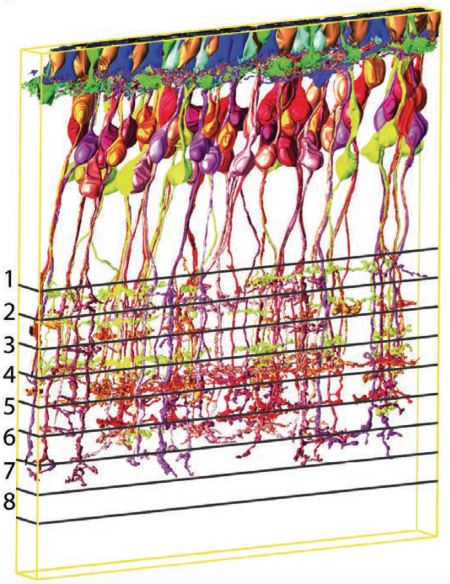